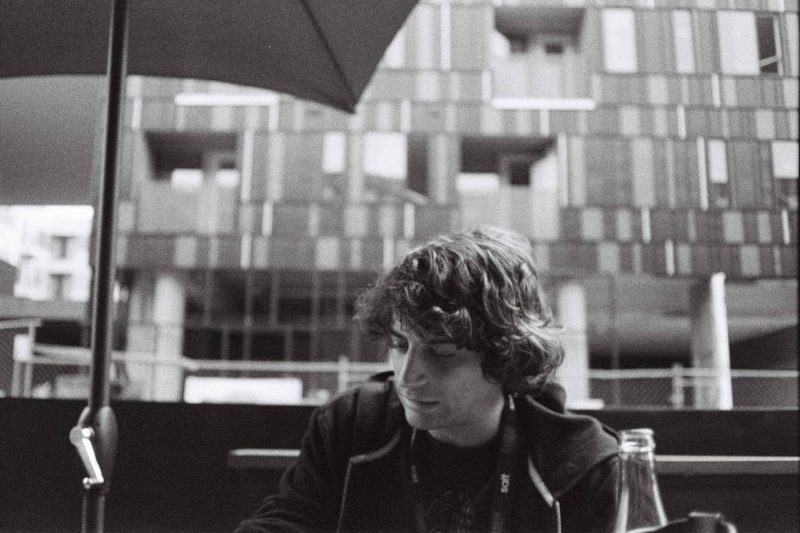 After being showed with praise at the Toronto Film Festival and deals for an American release in hand, “Baskın”s next stop was Austin’s Fantastic Fest, where young director Can Evrenol received the award for Best New Director. Evrenol was kind enough to spend some time talking to Bant Mag.

H: Before this you were at the Toronto Film Festival. How was it? Tell us a bit about that.

C: Toronto was the bomb. I was going for the first time. Even though it was a festival that I’d heard a lot about before, I only really understood that it was one of the biggest three or four festivals in the world and that there was a big market turning there, after I went. Of course, it was pretty enjoyable for me because Toronto’s a festival, but Midnight Madness has a separate synergy within it. When the audience participation at Midnight Madness, the fun, the general feel, and Toronto’s charisma all came together, it created a really nice atmosphere.

H: And the film’s being exhibited overseas with its Turkish as well…

C: I did that intentionally. I was even asked what it means during Q&A’s a couple times. I said, “It’s a mysterious, ancient name that is best not spoken about;” we joke about the title like that. Actually, this was the working title of the short film I made before this. The second act of the film is like the second act of the short. A group of cops enter a building and there’s actually a raid. I chose “Baskın” as the working title, and it stuck. After that, since there’s a movie called The Raid, we didn’t want to just translate it as “Raid.” And at that point, as I was thinking what to do, wondering if “Baskın” actually sounded good, if it could stand as a title on its own like Suspiria…

H: We’ve known about your shorts and now this is your first feature. Is this a film that you’ve poured everything into, everything you’ve accumulated throughout your life, and everything in you? Or are you saying, “No, I’m just getting started?”

C: You know it’s actually both. I mean, you said it in such a way… Yeah, on the one hand it is, but on the other hand, looking at the film, there are so many points at which I can’t watch it, both technically and in feeling. There are so many moments, where I think, “Let me do this better, let me do it this way, the sound is deficient here, or, man, should I have done this this way?” As long as those feelings are present that “I’m just starting out” feeling won’t subside anyway.

H: I also think that one of the most memorable scenes in the film is that music scene that takes place in the car. I think it holds a really nice place within the film; it’s the scene that first warmed me to it. Was the idea of having a scene where the music came to the forefront, like a nice break in the film, there all along?

C: There was actually an idea like this – this is really funny – five years ago, when I met Elijah Wood here at Fantastic Fest, and he told me that he really liked Selda Bağcan. I came back and was talking to Yiğit Turhan and stuff, and he had also said that he had friends in New York that liked Selda Bağcan that there was actually a situation like this. I knew of and liked “Yaz Gazeteci Yaz,” but that was about it. I really liked that this was happening, and thought I should use it in the film. I even had this idea in my mind, sort of half in jest that I’d show it to Elijah Wood when I came back here, and he’d enjoy it. So starting with the short, we used the music at the beginning of the film, in a way that I really enjoyed. I wanted to do something similar for the feature and was looking at copyright free stuff, thinking about what to use.

Just as I was thinking whether it should be at the beginning of the film or what, when I put the storyboard in front of me, and thought about the scenes one at a time, it occurred to me. I thought it would be nice if there were a transition after the situation in the diner, if we warmed it up… What if they sang together? I mean there was also this sort of scary thought in my head. I mean, how am I going to get these five guys to sing? It’s easy to say now, but sometimes it’s really hard to decide on something like that during the planning process. And, you know we shot that scene on the first day of filming? Everyone warmed to one another and it became this catalyzer within the film.

H: I’m sure there will be a lot of interest and questions on this topic, but there are five cops at the heart of this film. I don’t even know if it will be on the posters in Turkey, but on the foreign posters the tagline is “Five Cops Go to Hell,” right?

C: Right. We later decided not to write “Beş Polis Cehenneme” (Five Cops to Hell) in Turkish. We just wrote, “Cehennemin Dibine Kadar” (To the Depths of Hell). That’s already good on its own…

H: Well, in Turkey, especially after all that’s happened, this may be seen as a criticism of the police force or as a response. After all the police brutality we’ve experienced and seen in the past years, was there an intention to say, “Man, five cops, I’m going to send them to the depths of hell,” or should the audience be seeing it more as, “No, these may be five cops, but they’re police officers and they are people?”

C: Exactly. That is absolutely exactly how I want to answer that question, actually. However, what I generally do – even in Sandık (Chest) – is, I like it when you can find certain a politics of humanity or philosophy, or a criticism of fascism and family structure in general. I want to think that it’s there. I’d written the short before Gezi anyway, and there was a part in the short where there was blood dripping over the police emblem and stuff. During the Q&A after yesterday’s screening, there was a guy that said, “You made the cops look like pricks…” My mom’s friend, Doğu Yücel and Fırat Yücel’s mom, Şükran Yücel had said that she saw a major criticism of machismo when she watched the same film. After they watched it, some of my other friends were like, “Dude, the cops were so good, man!” I mean, I’m okay with all three, and how awesome if it continues this way. Besides that, I’m sure there will be negative reactions as well, but there were also those who came from the ministry and shook our hands and said they were proud of us during Toronto. For example, there was a retired cop that watched the movie here, and he came and talked about how he really enjoyed it. He said, “It’s so nice that you portrayed them as real; I really liked that cops were portrayed in this way in a film that’s from Turkey and not from the States.” I’m sure there will be those who feel the same way in Turkey.

H: It’s actually like the film’s been heavily influenced by many subgenres within the style of horror and wants to bring them all together. I think I also felt the influence of Italian horror cinema and music. There’s also Turkish music that comes in, and in the film’s theme during the final credits, there’s a finale with a whole Rob Zombie feel. Was this your intention overall? Did you consciously bring together all the things you like about horror, or did it just happen on its own?

C: Both happened simultaneously. It might also be something that already happened, maybe involuntarily, something that’s true of the whole post-Tarantino generation that comes with everything developing together and enjoying working in the mash up, mix up style. It’s also something that’s very suitable to my character. I have a good memory and I love being like, “that’s from this movie, from this scene.” Also, when I was writing the screenplay, I kept watching the movies like I normally do. Of course, I was paying a bit more attention because I was filming Baskın at the time, thinking they should be things that could give me a bit more inspiration. Other than that, I was watching movies – South Korean crime films, Haneke’s films, or other random films and scenes, all with a notebook in my hand. By the end, it became a bit of a sickness, really. I couldn’t really enjoy watching movies any more, I kept thinking I need to take notes, or maybe I should do this scene that way, or something. So it happened due to the nature of the work a little bit, but also due to my own. I enjoyed it as well. Honestly, I love movies like that.