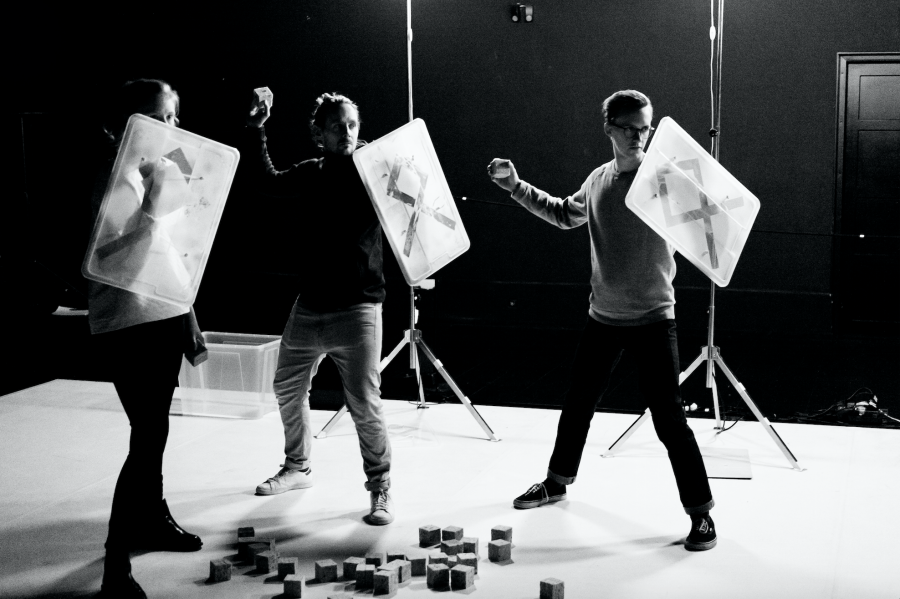 A conversation with the minds behind the Swedish theatre production Violence & Learning on their attempt to shake up the political debate through a participatory reformulation of one of Brecht’s most controversial works.

A daring piece of participatory political theater titled Violence & Learning (Våld & pedagogik) hit Swedish stages this spring. Based on Berthold Brecht’s The Measures Taken, the performance processes some iconic instances of recent political violence in Sweden. Guided by four actors, the audience recreates different scenarios inspired by true events, in what feels like a hybrid between activist workshop, historical reenactment and contact improv jam. As the play walks its spectators-cum-participants through street fights with fascists, repression by riot police, and the establishment of an underground network aiding undocumented refugees, “a young comrade” keeps committing serious blunders, putting the movement itself at ever greater risk.

Violence & Learning has been shown publicly and to activist-only audiences in cities across Sweden, and is about to start touring abroad. Bant Mag. caught up with its creators, John Hanse and Henrik Bromander, ahead of a public performance at Stockholm’s Kulturhuset.

Reading the play’s accompanying texts, one gets the impression it’s intended as an intervention in an ongoing political debate first, and artistic production only second. What’s your perception of how art and activism can and do connect?

John: That’s correct, it’s primarily a contribution to a political debate. But I don’t think that those two things stand in contradiction to one another. The most interesting art often is art that intervenes in society. Not that it needs to be outspokenly political; but to want something rather than simply being.

Henrik: We’ve actually noticed that this piece is received much differently by activist audiences than by the typical theater crowd. This play functions the way we want it to in that it works with activist audiences. And that is probably because we don’t see this as primarily an artistic production, but rather as a political tool in a debate. We’ve had lots of really positive feedback from activists, who’ve told us how they recognized their own political biography in the work in an often uncomfortable, but also enriching way. One experienced activist said that this was the first time a work of art spoke their language, in a way that was almost kind of eerie.

Said text also describes an antagonism between the pacifist on the one hand and the radical militant on the other. In how far does this description really apply to the political space?

John: The way we see it, the debate over those issues is extremely polarized and rigid. Our intention has been to take positions that are different from those advanced by militant or pacifist groups. There are many far more interesting perspectives in-between those opposing poles. I don’t feel that those contradictions are as clear cut in the reality of political struggle as they are in debates over what’s right and wrong. Groups and individuals often get stuck in old lines of reasoning, and this project is an attempt to shake things up.

So your point is that this distinction is actually somewhat artificial, and not really reflective of reality?

John:  Yeah, it’s much more pronounced in theory than it is in practice.

Henrik: In any practical situation, it tends to be irrelevant what your party line might be. There is something problematic in that, which we try to investigate in this play.

This performance is highly participatory and the distinction between actors and audience is partly suspended. What possibilities does this format create? What dynamics grow out of it and what are its limits?

John: We’ve been very clear that the plot is set, and the audience cannot alter it. We use the analogy of a crime scene reenactment, where we provide a number of interesting scenarios that the audience gets to partake in recreating. This allows for people to get an embodied experience of what is being discussed, and thus gain a deeper understanding of these situations. For those who’ve never locked arms in a blockade, pretending to do so in the play creates a degree of readiness for such scenarios, while those who have had such experience get a new way of accessing a discussion on the issue.

You end each performance by having an open discussion with the audience. How have these conversations played out?

Henrik: The discussions with activist crowds, where people have brought up personal experiences and tactical questions, have generally been much livelier and deeper than the conversations after public shows. We’re still kind of struggling with how to handle the discussions after open performances. People there typically talk about their emotional reactions rather than their political convictions. That might be interesting for them, but we’re not primarily interested in psychology.

John: At the same time, it was interesting to hear some Polish squatters who attended one show talk about the play as having a therapeutic effect.

It seems that in doing this performance you assume potential participants to fall into a spectrum ranging from liberal pacifist to radical militant. What happens if a right wing activist or a cop shows up for the performance?

Henrik: That hasn’t happened yet.

Henrik: Unless they come simply to sabotage things, it would be super interesting to have a cop in the audience, who would then also be more than welcome to explain what it’s like to break up a blockade.

John: It would also be interesting to have a far right activist or cop help us include better arguments for their respective sides, because we are interested in making the scenarios more complex. In any case, given that the play’s actual plot is pre-determined, anyone who attempts to alter it would be asked in a friendly but determined manner to leave.

This performance is inspired by Brecht. Can you comment on this inspiration?

Henrik: This project came out of John enthusiastically introducing me to Brecht’s The Measures Taken. While I loved the work, the seemingly harsh Stalinist dimension of it also made me pretty uneasy. But there is a lot of complexity there too, and at times it almost feels as if Brecht actually sympathized more with the reasoning of the young comrade, than the agitators who execute him in the name of revolutionary strategy. We wanted to transfer this text to the contemporary context, while retaining the participatory element.

John: In Brecht’s work the measure that is taken is to shoot the young comrade for threatening the movement. In our version the other activists refrain from taking any measure against the young comrade. For us that was a way to illustrate today’s movements’ lack of answers.

Henrik: Aside from not having answers, you don’t have the kind of apparatus of violence you had then either. What do you do if a comrade commits such grave mistakes as, say, planting a bomb that would have disastrous consequences for everyone? You can’t just kill that person. That’s a very interesting debate, both strategically and morally, for a movement that still challenges power, but has entirely lost its…

John: …its claim to power.

John: Both, but especially the latter. The creation of that role, and its incapacity to handle it. It’s one of the questions we lack answers for. How does a movement that is horizontal, but nevertheless is prepared to break the law and use violent means, handle the fact that not everyone thinks or acts alike? I don’t think a political movement that challenges the system can avoid taking a position on how to face and use violence.

Political violence in Sweden has its clear delineations. In how far can this piece be transferred to other contexts and remain relevant?

Henrik: We’ve been asked similar questions by critical audience members, and our response has been that even if we relocated this play to a much more violent, perhaps even military context, the scenarios would perhaps be different, but the basic structure would remain unchanged. If you want to extract a message from our work, it might be an appeal for a common collective line…

John: …as well as a grappling after what that line is.

Henrik: Haha, yeah, we don’t know where the line is, but we think one should keep to it.

John: One interesting thing we’re looking forward to as we head to Germany and the UK is the comparison of what’s different, and what doesn’t apply in those contexts.

Finally, can we expect more joint works by you?

Henrik: Yes, it’s likely. We work well together. We’ve been talking quite a bit about doing an interpretation of a text by Sartre on a group of resistance fighters held captive and being tortured under the Vichy regime. 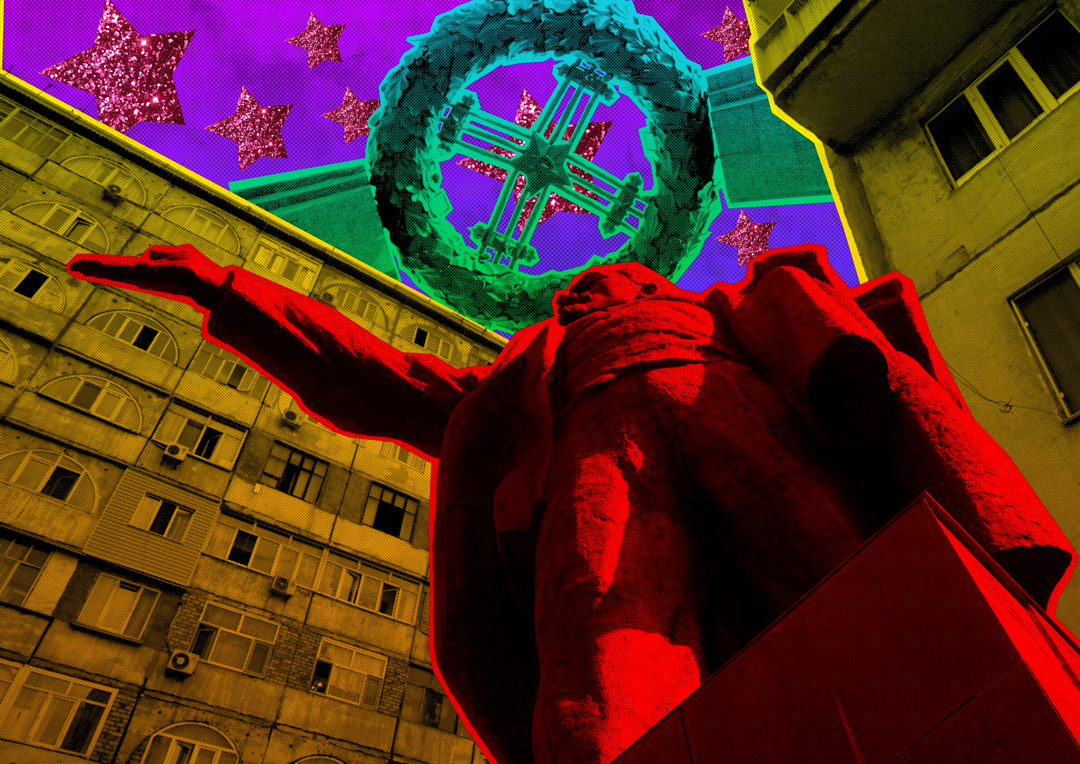 Back to the Future with the Queer Communists of Kyrgyzstan