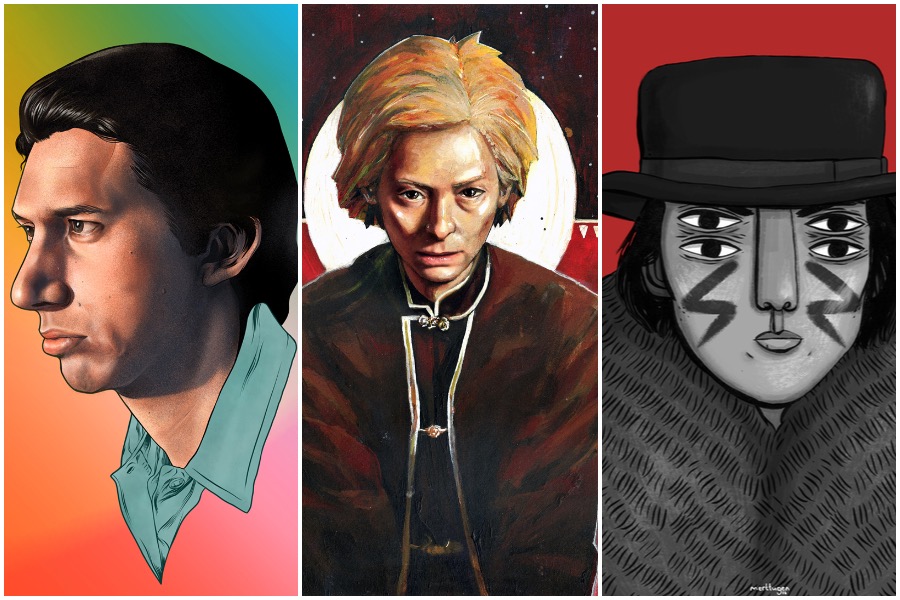 With Jim Jarmusch latest film “Paterson” being the pretext, we are laying out the lonely and original characters created by one of the most successful directors of American indie cinema.

The youngster “Allie” /Permanent Vacation
Illustration: İsmail Berkel
Although Permanent Vacation, which Jarmusch began as the final project for his film education at New York University, was the cause of his not being able to graduate school, it can be seen as an example of the director’s unique style. The main character Aloysius is a youngster who is constantly bouncing around from place to place on the streets of Manhattan. Allie is portrayed by Jarmusch’s friend Chris Parker, who had not had any previous acting experience. Advancing without having a distinct destination, Allie chats with a Vietnam veteran in a rundown building, visits his mother at a mental institution, requests songs from a musician playing the saxophone on the street and flirts with the woman he comes across. While the oddities of the strange characters that Allie comes across add a fantastic tone to the film, the spaces that normally would not attract our attention become fairytale-like with Jarmusch’s point of view. This youngster who is open to experiences brings to mind Catcher in the Rye’s Holden Caulfield. We should also add that the poetic side of the character was influenced by Jarmusch’s dreams of pursuing a career as a poet.

Stranger Than Paradise, considered the director’s first film, was awarded the Golden Camera award at the 1984 Cannes Film Festival. The character we know from Permanent Vacation as the street musician John Lurie now portrays Willie, one of history’s first hipsters. The life of Willie, who does not have a care in the world, changes with the surprise arrival of his 16 year old cousin from Hungary. Willie, up until then whose biggest pleasure was having ready-to-eat meals in front of the TV, had completely turned into a typical American. After some time Willie begins to sympathize with his cousin by making an effort, something he has never done before, and embarks on a long voyage. This seemingly shallow, unpretentious and cool character becomes sympathetic in the hands of Jarmusch. Stranger Than Paradise becomes the first example of one of the concepts that Jarmusch loves to touch up on, a foreigner far away from his country.

Happy and cheerful “Roberto” /Down by Law
Illustration: Hilal Can

Describing the escape of three people from a prison in New Orleans, Down by Law is not only one of Jarmusch’s funniest films, but also a movie that introduces Roberto Benigni to the world. Italian Roberto, who ends up in the same cell as two Americans who claim to be imprisoned after a misunderstanding, undertakes the task of cheering up this pessimistic and grumpy duo. Despite his bad English, Roberto who knows all tongue twisters and jokes, convinces his friends to escape from prison (just like in American movies). Robert’s strange plan despite the thousands of difficulties works and the trio find themselves out. Robert, who looks at every situation from the positive side is able to prepare a nice meal and enjoy himself in the forest. Jarmusch chooses to reward Robert, a character who is much more colorful and cheerful than his usual characters with a happy ending as he deserves.

Jarmusch’s first color film, Mystery Train, combines three stories that occur in Memphis with the characters’ hotel and Elvis Presley. The filmWs main story focuses on a Japanese couple who have to go to Memphis because of their admiration for Elvis Presley and Carl Perkins. During the debate that goes on through the film, Jun defends Perkins while Mitzuko never gives up on Presley. The couple, whose passion for Rock’n Roll has brought them to the other side of the world, live this experience to the fullest. The couple do not neglect to listen to music through shared headphones and stop by every place their idols have visited. While Mitzuko is cheerful and chirpy, Jun prefers to protect dull and calm expression on his face. His cigarette behind the ear, hair gelled in a struggle to fix and emotionless face, Jun believes himself to be very cool, even though no matter what he does he cannot hide his excitement about the journey.

Jarmusch, who loves to divide his films up into segments, has also divided Night on Earth into five divisions. Although we travel to Los Angeles, New York, Paris, Rome and Helsinki, the film which does not venture away from the inside of the taxi, focuses on the relationship between the taxi drivers and their passengers. The first part of the film, which takes place in Los Angeles, tells the story of a young taxi driver named Corky, played by Winona Ryder. Corky, with her black sunglasses, cap and pink chewing gum, signatures of Jarmusch, seems too young to drive. Corky picks up Victoria (Gena Rowlands) from the airport, a chic business woman who is constantly talking on the phone, stares at her in an unimpressed way and they set out. The two, who are quite different from each other, start chatting and Victoria who we find out to be a cast director, offers Corky a lead role in a movie.  Corky, who says she has planned her life completely and dreams of becoming a car repairman, politely rejects the proposal, which she knows many women dream of.

“Ghost Dog” who refuses to grow up /Ghost Dog: The Way of the Samurai
Illustration: Gizem Winter

We can call Ghost Dog: The Way of the Samurai the most unique film of Jarmusch’s filmography. The director’s action film attempt combines the mafia and samurai films while 90’s hip-hop music plays in the background. Ghost Dog, who lives alone on a roof and only communicates with pigeon is a hit man played by Forest Whitaker. His whole life is based on eastern teachings and a Japanese samurai book called Hagakure. He has to defend himself when he becomes the target of the mafia. His closest friends being an ice cream man who does not know English and a little girl, Ghost Dog is actually a child who refuses to grow up. Jarmusch, who questions inevitable change and lack of communication though this tight action movie, salutes to his favorite director Kurosawa.

Jarmusch, who specializes in portraying American city life also proves his excellence in portraying western life with Dead Man. William Blake, who goes to hell with the train he gets on, realizes he is dead and embarks on a journey in the desert. After city life, our hero who becomes helpless in nature, undergoes a complete transformation with the help of an Indian named Nobody, whom he meets on the way. Blake, a shy and insecure youngster who turns into a brave and cold-blooded outlaw, is actually on a spiritual journey of trying to reconcile with death. Although Blake says that he has nothing to do with the poet William Blake and that he is actually an accountant, he does not neglect to quote from Blake’s poetry and portrays a certain melancholy throughout the film. We should also add that the starring Johnny Depp has performed exceptionally well in the film

Coffee and Cigarettes, basically centered around the theme of coffee and cigarettes as its name suggests, is composed of eleven different short films. We become a part of the conversations of names such as Bill Murray, Cate Blanchett, and The White Stripes. The section called Somewhere in California shows us Tom Waits and Iggy Pop’s pleasure of coffee and cigarettes. This section, where Iggy Pop and Tom Waits reenact themselves, takes place in a dark restaurant. Tom, who says that he has operated on someone before he came to the restaurant, explains that he dashes from pillar to post between music and medicine, although it is not convincing. The two who are not satisfied with just coffee, decide to smoke a couple of cigarettes to celebrate their quitting smoking. Waits who makes fun of Iggy Pop’s popular pleasures, also gets offended by everything that is said to him. Watching Waits, who has portrayed countless Jarmusch’s characters, reenacting himself is very entertaining.

Broken Flowers, which took home the Grand Prize at the Cannes Film Festival, is a modern-day Don Juan story. The film which we watch Bill Murray starring in, brings together America’s best deadpan actor and director. Don Johnston, newly abandoned by his girlfriend, is a very passive character who does not leave his couch unless it is necessary. When he receives an anonymous letter explaining that he has a 19 year old son who has set out to find him, he has to set out on a journey visiting his ex-girlfriends one by one. His ex-girlfriends; Julie Delpy, Sharon Stone, Frances Conroy, Jessica Lange and Tilda Swinton, all represent a different period in Don’s life. Having a bouquet of pink flowers made before each visit, Don shows no signs of emotion and acts as if he does not want the journey planned for him. Living his life just for the sake of it and not once looking back, Jarmusch sets his character on a journey through his past and actually tells us that nobody can advance without facing their past.

Limits of Control is an unusual spy film that takes place in Spain. Starring in the film we see Isaach de Bankole, who has previously acted in many Jarmusch films in supporting roles. The main character, who does not know Spanish and is on duty in Spain, goes by the nickname The Lone Man. He is a courier carrying dangerous packages which he does not know contain. Lone Man, who is sent to Madrid by two mysterious men, has a philosophical conversation with every person he is instructed to meet. After reading the note inside the matchbox, swallowing it and having two espressos to top it off, The Lone Man is a professional. The film, in which reality and dream are intertwined, questions the boundaries of this calm, quiet and work concentrated character.

Only Lovers Left Alive, describes the relationship between two vampires named Adam and Eve which exceeds a hundred years. Tom Hiddleston, who accompanied Tilda Swinton on the lead actually said that Jarmusch had always been shooting vampire films but this is the first time he actually admits his characters as vampires. Eve chooses to live a quiet, artful life with her close friend Christopher Marlowe in Tanca, while her husband, whom she married several times over the course of her long life, preferred to make music in Detroit. Eve has preferred to learn all the languages in the world and to read almost every book. Having traveled the whole world, the wise character still manages to enjoy life as opposed to her husband’s troubles. Eve is able to adapt to every changing period. Let’s also add that being a vampire suits Tilda Swinton the best.

Jarmusch’s latest character Paterson, like his first main character Allie, is an amatour poet. He is a bus driver in New Jersey sharing the name of the place he lives, Paterson. In a way he has become whole with the city itself. Paterson, who follows the same ritual everyday, after his bus expedition; watches the city, walks his dog and drinks a beer. Laura, Paterson’s wife who is very supportive of his poetry, unlike Paterson creates new projects everyday and constantly changes her agenda. Starring in the movie is Adam Driver, whose acting style suits the style of Jarmusch’s films very much. The film which depicts a week’s duration, is said by the director to have been influenced by the non-dramatic aspects of life and that it should be seen as a celebration of the small details in everyday life.